Long time no see! Ohh, way too long, I guess.

So, it's only been a little over three years since I posted. Did ya miss me? ;-)

When did I get 50 something followers on this blog? The last time I looked there were fewer than 20. Granted, that was awhile ago but it's nice to know someone is out there, even if I haven't been around.

I have no excuse for not keeping up with this blog as I'd intended from the beginning. No, I do have an excuse. In fact, I have several but won't bore you with them. Suffice to say life intervenes. I won't promise to post daily but will make a serious effort to post more regularly. I do have a few new cooking things to discuss so that shouldn't be too difficult.

Let's see. What's changed since I last posted an entry? Not much, actually. I still live in the same apartment, still have my beloved Sammy the cat, still eat low carb most of the time, and still love to cook. Oh, oh! I'm a grandma! Yeah, my oldest son and his wife had a sweet baby girl, Clara, in September. She's a real love and grandchildren really are grand! They live in Austin so I don't get to see them as often as I'd like but that's life, at least for now. Jonathan, my other son, successfully thru-hiked the Appalachian Trail a couple of years ago and to say I'm proud of him is quite an understatement. When he got off the trail he landed a job in Utah and has been up there since. He's planning to move back to my neck of the woods, though, and I'm very happy about that. I've really missed having my sons close.

My stepdad died a couple of years ago. Mom and I both miss him but she's doing surprisingly well. She's slowed down a bit but that's to be expected. She isn't 20 anymore but man, she still stays pretty active and is very independent. I quit my job in October of last year. Yep, after almost 9 years of being a barista I walked away from it. I didn't want to but I've developed a severe allergy to a common resin that's in seemingly *everything* and the constant washing of my hands was just too much. Now I work as a contracted non-emergency medical transporter and I love it. I drive 200 to 300 miles most days and have met some really great people. I feel very fortunate to have found more work I love. My hands are still a bloody mess, literally, and hurt like the dickens most days but at least I don't have to wash them constantly as I used to and that helps. Because of the pain and bleeding I can't hold a pen or marker for more than a minute or two now and had to give up my pen pals and letter writing. Trust me, that was very difficult. Letter writing was a big part of my life for a long timeand I'm still not used to my mailbox being empty or only full of junk. Looking into that mailbox makes me feel pretty lonely at times.

Oh yes, I mustn't forget this - I got a Dexcom CGM! I'd wanted one for quite awhile and finally got insurance approval almost a year ago. It's one of the most important tools in my Diabetes arsenal and if you know someone with Diabetes, especially Type 1, please encourage them to look into CGM technology. The device and supplies are a bit on the pricey side but are so very much worth it.

Other than all that, life is pretty much the same. I'm still me and still cooking simple and good foods for one.

Carol over at Frugal Like Grandma posted today on her blog about stuffed hot dogs. I rarely eat hot dogs, stuffing, or bacon and can't recall ever having eaten them together but I had the ingredients and the pictures looked good so I made stuffed hot dogs for my dinner tonight. Let me say that this one is a real winner but if you're sodium conscious, you might wanna have these as a rare treat!

I used turkey franks, stuffing in a box because I couldn't see making the tiny amount needed for four hot dogs, and vegetarian "bacon" because it's what I had on hand. I don't have any toothpicks but when I googled for ideas on what to use instead, I decided the idea of uncooked spaghetti, broken into pieces, would work. The stuffed dogs were on the prepared pan and I went to get the spaghetti and ooops, I'm out of that. So, I made the dogs without anything to keep the bacon on and had a mental image of bacon flopping around in my oven but the skinniness of the franks and the length of the strips worked to my advantage. I just tucked the end of each bacon strip under the dog and after 20 minutes in a 350 degree oven, the bacon was still in place. Oh, and I put the bacon on only two of the dogs and the ones without the bacon were just as good as those with.


So, here you have it - stuffed hot dogs. I ate them with steamed spinach and am a very happy camper! 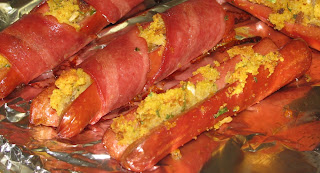 I'm going to play with different low carb stuffing ideas to see if any of them will work in these delicious dogs but in the meantime, I have a new meal idea to enjoy now and then.